A two-part blog post that explores how our modernist culture got us into the mess we’re in, and a small suggestion of how to proceed to an Earth that can sustain the possibility for human and all other life to flourish for generations.

Getting Real About Humanity’s Situation

So, what is the alternative to trying to reach the modernists ‘perfect’ Globe?  In part one we came to understand that in any real sense we have never been modern, it was ‘only’ an idea.  Further, we recognized that the destination of the modernist ‘perfect’ Globe was an impossible conceit. It can never be reached.  But at the same time, we also recognized that we cannot and do not want to go back to the ‘Land’, despite the fact it had some positive points.

This is Your Captain Speaking

Bruno Latour, one of the pre-eminent philosophers of science alive today tells a great story to make our predicament clear.  To paraphrase:

Some years ago, we Westerners all got on a plane called ‘modernism’, that took off from the Land airport. After take-off, the Captain tells the passengers just how amazingly perfect their selected destination is, to expect continuous uneventful progress on the flight to the Globe, and that the flight will be short. Even though this is the first and only flight from Land to Globe, the captain's voice exudes confidence and excitement.  The captain gets updates from the destination, the Globe, and passes these on to the passengers: more details of how amazing the Globe is compared to pre-modern Land.

But just as the passengers were getting more and more excited about just how clever they were to get on this flight, the Captain announces turbulence and that a small diversion is required, but the course to the modernist Globe destination would be resumed soon.  Some passengers start to get nervous.  But what can they do at 10,000m?  Jump?  And even if they could find a parachute and jump, where would they come down.  The Land is far in the past, but the destination Globe is still far in the future.

Then the Captain receives the news the Globe airport is now closed due to a massive storm that would last longer than the fuel left on board.  The Captain, as the person responsible for everyone's well-being, naturally plans a course back to the Land airport, and announces this plan to the passengers, knowing most will be very upset – everyone wanted to progress to the amazing and perfect Globe.

But upon turning the plane around and radioing Land airport there is no reply; it appears that the airport has been demolished and no landing is possible.  The Captain gets on the intercom again: “Modernists, the Globe is closed due to bad weather, and the Land no longer exists. We have fuel for just two more hours. You need to decide where you want me to land and how to get there!  I’ve heard rumors that we may be able to land at a destination I'm becoming aware of called Earth.  You might want to consider this possibility and what it could entail; perhaps the cabin crew can help?” <pause>  “1 hour 55 minutes” <pause> “1 hour 50 minutes”…

What will the modernists decide to do, and how to do it? Will everyone perish, or will the Earth present new opportunities? Stay tuned for next week’s episode in the exciting story of humanitys' futures!”

A Path Forward to Sustainable Earth

So, could a path forward be to bring ideas from the Land, ideas from the Globe, and new ideas to a new place?  What if we called this new place "Earth" or "Gaia".  Can we recognize that now, in our current situation, some parts of the Land world-views and cultures are relevant to our circumstances today? (World-views and cultures that peoples who managed to retain their indigeneity against the onslaught of colonization often still live and breathe every day).  Can we recognize that not everything about the modernist project to perfect ourselves is inherently 'bad'; that there is some baby in the modernist bathwater?

Starting Our Journey to a Sustainable Earth

So how might we start such a project?  A project to save ourselves and future generations from our modernist selves.  Bruno Latour has a suggestion here too.  Perhaps we should start by understanding just where it is that we live, where it is that all life exists?

Perhaps we can take a lesson from one of the most well-known modernist projects: the moon shot.  One of the key cultural icons from this project was inspiring pictures.  For example, Apollo 10 took humanity's first complete picture of the whole of the globe.  And the modernists loved it: here was evidence that humanity lives altogether, that in some sense the Globe is real and that the perfect global village was in clear sight, just a few years in the future. 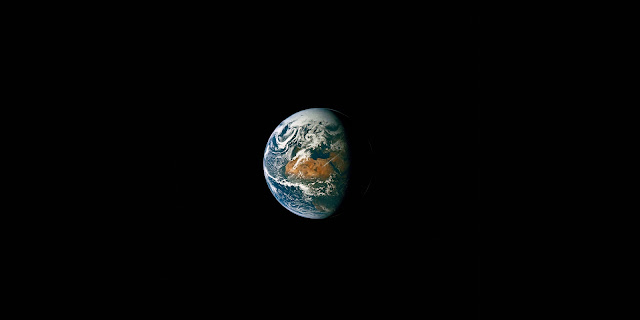 But there are other pictures, much less well known, that call into question this reading.  At around 17h04 UTC on Nov 24, 1969, as Apollo 12 approached the earth at 12,000km/h, astronaut Allan Bean observed “Fantastic sight. What we see now is the Sun is almost completely eclipsed now, and what it's done is illuminated the atmosphere all the way around the Earth.”, then a few minutes later “You can't see the Earth. It's black just like space”. 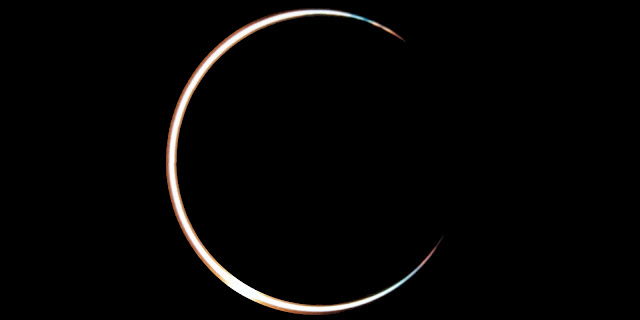 So perhaps we don't live on a globe at all.  Perhaps the globe is in fact dark like space.  Perhaps we live in the 6km high thin sliver of the atmosphere that supports life?  If you like a 'critical zone' for all life.  Imagine if we conceived of our home, of Gaia, as this tiny space. Could this be a good way to start to conceive of our new destination, Earth?  A destination that we want to sustain all of us.  Could this perspective ground new cultures, new ways of knowing and being?  Could this perspective allow us to solve what for modernists are increasingly looking like unsolvable problems?

Just how tiny is the critical zone?  Let's put into perspective in two ways: (1) many of us have commutes to work that are longer than 6km (2) If the planet was the size of a basketball, the critical zone would be the thickness of a piece of paper.

The Tiny Critical Zone in Context (Derived from © NASA, 2010)

Our current modernist culture and journey to a ‘perfect’ Globe is making the critical zone less and less able to sustain us, let alone enable us and all other life to flourish for generations to come. Could the idea that we actually live, and can only live, in a tiny, fragile, 6km high critical zone be a useful mental frame for the Earth we actually live within?  What cultures do we need to create that will promote human behaviours which result in a critical zone amenable to the flourishing of all life?  What should we bring with us from the Land?  What should we bring with us from our ideas of the 'perfect' Globe? What role would human organizations, businesses, enterprises, governments play in such a culture?

We’ll continue to explore these questions in future blog posts.

With full credit to the Land, Globe, Erath/Gaia ideas of one of the pre-eminent philosophers of science Bruno Latour, author of “We Have Never Been Modern”  Go deeper with this curated YouTube playlist of some of Latour’s ideas.  Latour is often not so easy to follow, so expect to have to work to get these videos… but the effort is worth it.